By the time you’ve read this sentence, at least half a million Google searches would have taken place.

As someone who works in the data centre industry, you’d like to think I’d be pretty happy with that particular statistic. After all, so far, those very searches have led to roughly 40 trillion gigabytes of data and well…it needs to live somewhere.

But here’s the thing, as much as I enjoy my work, I’m also human and I can’t help but be concerned about ‘what’ endless data really means, particularly when it comes to mine and your personal information, let alone what it means to our children.

This whole train of thought sprung from watching ‘The Social Dilemma’ on Netflix the other evening which featured a number of founding members of the usual Social Media suspects, who were all essentially involved from ‘the ground floor’ before their organisations became household names.

Among the revelations, there were (broadly speaking), no real surprises, however the algorithms and psychology used to predict our behaviour (when we were most likely to be online, how long we looked at an image, an advert, what we were most likely to click on and who we interacted with most frequently), was as staggering as it was unnerving.

Now this where the crux of the debate sits for me because conversely, there are some pretty undeniable ‘wins’ which the growth of data has afforded us. Take the Human Genome Project (HGP) as one example. Formally launched in 1990, it remains the world’s largest collaborative biological project, with the aspirational goal to determine the base pairs which make up human DNA, as well as mapping all the genes of the human genome.

The biggest argument in favour of the HGP was its intention to learn and leverage the information to essentially benefit us, as human beings. It is, on its very best day, data doing what we created it to do. The more information exists, the easier it becomes for healthcare professionals to diagnose, avoid preventable disease, identify and predict epidemic outbreaks; the benefits for which, hopefully no longer require a stretch of the imagination.

So, that goes someway to explaining why the global Big Data healthcare analytics industry was worth £22.6 billion at the end of 2019 with no signs of slowing up. Turns out, saving lives is both time and money well spent.

With that, you could say that the balance has been restored. We get to potentially live healthier, longer lives, courtesy of the HGP, with the mild inconvenience of receiving more targeted ads while we’re still living and breathing – it’s not a big trade off, unless of course, you have serious reservations about the fact that anything and everything you do online will be recorded and leveraged while you’re still here.

And if you think you can just cast aside your devices, hop in the car and leave your virtual footprint in the rear view…well, think again because there are fewer more progressive markets than the car trade when it comes to the utilisation of data to further human endeavour.

Take Jaguar Land Rover as one example, who have set their sights on producing a ‘Destination Zero Plan’ designed to achieve zero emissions, zero accidents and zero congestion, using ‘Predictive Touch’. It is, by anyone’s measure a pretty awesome plan. It also means your car will need to know more about you than you know about yourself.

If they get it right, they claim the use of touchless technology could potentially reduce distraction by 50 per cent using remarkably clever technology which leverages gesture trackers and sensors designed to read peoples’ movements, as well as predicting your intentions based upon your account profile. It is ridiculously clever.

You’ll basically be touching an on-screen button without well…actually touching it. Based on sensory data, your car can even detect and aid people with motor disabilities. Satellite tracking will be able to monitor any journey you ever take and if rumours are to be taken seriously, your cars speed can be controlled and limited to decrease accidents and fatalities.

Now, when Henry Ford famously said, “If I had asked people what they wanted, they would have said faster horses.” – l don’t think for a second that he considered the replacement of the horse would also go on to develop a mind of its own and render the insurance claims market unrecognisable.

While it’s difficult not to be impressed by the sheer ingenuity of the car industry, we can also say with certainty that we’re yet to see the genuine ramifications which progress invariably brings. History says the more ‘bells and whistles’ you introduce, the greater the possibility for distraction; look no further than the ingenious device you’re reading this on, all that it can do and the carnage it can create when placed, screen-up.

Technology is proving to be both friend and foible, so if we can’t control this particular snowball, we should at least understand its direction and trajectory. Now I know I’m lucky, I work for an organisation who takes sustainability very seriously with an unrelenting commitment to producing socially responsible data centres but we are also among the few in a world where the growth of data is starting to become unpredictable, to put it politely.

If you began today, it would take you approximately 181 million years to download all of the data on the internet (based on an average of speed 44mbps). Now, if you consider 90% of that was generated in the last two years, then in a virtual landscape that knows no borders, it naturally raises the question of regulation.

Each of us has a virtual footprint – me, you, our families our children. We’re accessible, open, predictable and susceptible in equal measure. 40 trillion gigabytes of data (that’s 40 zettabytes) is already out there and almost all of it unstructured, unregulated, available for almost limitless progress and equally open to abuse. At some point, the grown-ups will need to step in before it all gets out of hand.

The dilemma which data has produced isn’t really new, it can be compared to every major human endeavour embarked upon in the name of progress. Almost every significant advancement we have made as a species of any note, carries its own cost – you need look no further than the root causes of global warming.

And therein lies the rub for me. That very data from the technology we’ve created has become a living, breathing, mutating, unregulated monster – but that very same creation, also means that we have never been more informed, more connected and in turn, more empowered to use that information to address every meaningful challenge we face today.

The question is, will that data be a defining point in our evolution or one giant leap backward for mankind? Even if you’re the first to discover the answer, rest assured you won’t be the only one watching. 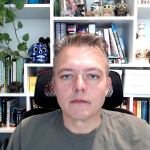