Run for your life by Louise Methven, 3rd December 2021

Stood at the starting line at one of the world’s most famous Marathon routes, I couldn’t help but wonder, what on earth I’d got myself into. More to the point, whether anyone would really notice if I decided to turn around and go home – As appealing as the second option was, it would also involve me breaking the most important promise I’d ever made.

Talk to anyone who has ran a marathon before and I’ll guarantee you that there is an interesting backstory or motivation that bought them to that starting line – mine was deeply personal. 10 years ago at just 61, my Dad was diagnosed with terminal cancer on a Wednesday afternoon and we were told that he only had a matter of months – by the following Monday he had died.

The days between his diagnosis to the moment we lost him were horrendous. The hospital did their best to minimise his discomfort with morphine and true to form, all my Dad was worried about, was how we would pay for the equipment for his care. I tried to explain that there were some remarkable charities that were helping us, but he was having none of it. Eventually, in a last-ditch attempt to placate him, I said ‘What if I promise to run the London Marathon and raise money for the charities who have helped us?’ – The very fact that this made him happy meant that this was one promise that I couldn’t break.

What nobody tells you

On the list of things that nobody tells you when running a marathon, is that getting a place in the London run is incredibly hard. Every year for 10 years I entered the ballot and every year the answer was no. So, in December 2020, a combination of frustration, lockdown boredom and life re-evaluation kicked in. I decided that I would try to lose some weight, get healthy by exercising and address my unhealthy relationship with food.

It’s also probably worth mentioning at this stage that I’m a complete non-runner, so even if I managed to drop the weight, I didn’t have the first clue where to start. This is thankfully where my day job paid dividends. I am a bit of a planner and might indulge in a list or two, so after a truck-tonne of reading, I registered for a London virtual marathon, set a diet plan and began plotting walking and jogging routes along the Kennet & Avon canel between Reading and Hungerford (where I knew there were plenty of pubs, villages and flat surfaces).

I also discovered a superb virtual running Facebook forum called ‘Run-Mummy-Run’ which was offering a competition to win a place in a London Marathon. It seemed like a ridiculous long-shot at the time but I shared my story regardless – and then I actually won a place :).

Call it serendipitous, call it coincidence, call it whatever you like but 10 years almost to the day, the chance for me to fulfil the promise to my dad was here and the clock was ticking. So armed with some new trainers and Chris Evans’ book ‘119 days to go – how to run a marathon’, I super-charged my training programme and that’s where the real work began.

Every moment that I could grab between work became an opportunity to squeeze in a run. The only way I could make it work, would be to make it as much an integral part of my day as brushing my teeth, or it was just not going to happen.

To hold myself truly accountable I had shared my plans on social and began charting my progress and it’s at that stage that you realise that running a marathon is really a team sport. Every week I’d get messages of encouragement from friends and family, my mum would send food in the post and then of course, there was my husband who (having ran the Edinburgh marathon) knew precisely what I’d let myself in for. It was just the little things like walking the dog, picking me up at the end of a long run, tracking my location, and checking in to see if I was ok, which gave me the support when I needed it the most – he was an absolute star and in my corner for every step of my journey, good and bad. 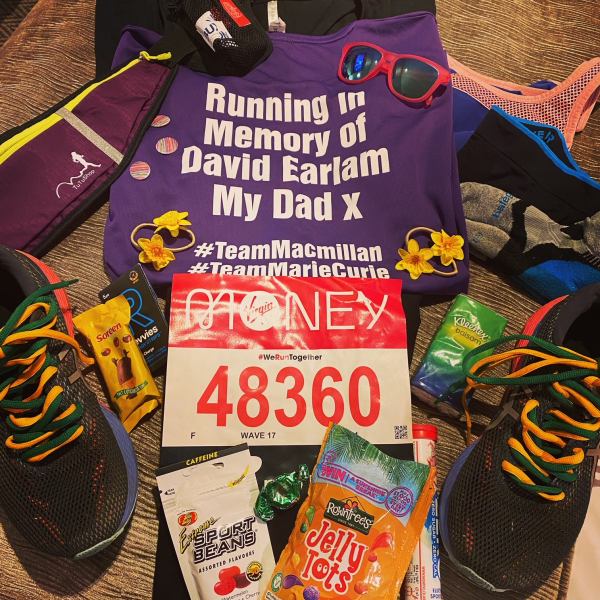 Here’s another thing, anyone who tells you that training gets easier the more you do it is lying, at least it didn’t for me. The more I achieved, the higher my expectations and the tougher the distances became. Sundays became longer run days where I began hitting the 20-mile markers, Tuesday’s I would cross train, on Thursday another 5-10k and Saturdays I started to do Parkruns, all just trying to get the tempo right – I became so obsessed with my training that before I knew it, I had lost 5 stone and was in serious danger of becoming a runner.

Stood in the starting pen on the day, the camaraderie between the runners is enough to renew your faith in humanity. Everyone I spoke to has their story to tell and every last one was either incredibly inspiring or frankly heart-breaking. I’ve also read a lot about the mutual respect that marathon runners share and stood there at the starting line, I began to understand why. It’s not just the reasons for running which we share but there is a knowing acknowledgement of the work that it takes simply to get to the starting point, let alone the finishing line.

I was so filled with adrenalin the first half of the race, a lot of it went by in a blur. As someone who wasn’t a natural runner, I always knew that the distance would involve a mixture of walking and running. In fact, I was overtaken a group of guys carrying a fire engine, a minion and a gentlemen dressed as a giant ovary – but none of it mattered.

The other great legend for marathon runners is ‘The wall’ and I hit mine solidly at the 18-mile mark where the weather took a nasty turn, right in the middle of Canary Wharf and my legs decided that they no longer wanted to work. I saw my husband, headed straight towards him, and asked him to take me home. I mean nobody would know right? They’d seen me at the starting line, I’d posed for pictures, done the training but this was getting stupid. He simply gave me a hug, passed me some an energy drink, physically turned me around to face the direction I needed to go in and told me that he’d see me at the finishing line – and just like that, whether I liked it or not, I was running once again.

Running with your heart

I genuinely wish that I had the words to describe what happened to me at mile 22 but I’m afraid that I didn’t then and (weeks later), I still don’t. I’d heard that the crowd carries you, but nothing can prepare you for the shot of positivity that a huge group of complete strangers shouting your name gives you. All I know is that it was like a huge weight was lifted, my head was up, my legs felt lighter and for the first time in over 22 miles, I began to look around, be present and actually started to enjoy myself.

The last 4 miles, the crowd were just incredible, and it slowly began to dawn on me on what I’d achieved – This was me, 5 stone lighter, a lot healthier and on my way to completing something which very few people in the world have accomplished but more than that – This was me keeping my promise to my dad, 10 years almost to the day that we lost him. This was me, the person that never ran, running with all my heart.

When I finally crossed the finishing line, my first words were genuinely ‘Never again’ but as I write this today, I’ve entered the ballot for the 2022 London Marathon.  I have also signed up for next year’s Wokingham half and Manchester Marathon and just a few weeks ago, I ran the Newbury half.

I may still have (what many people describe as) runners-high but the moment I crossed that finishing line, I believed that anything is possible. I realised every limitation that I had imposed upon myself could be lifted and I understood for the very first time, that I really could do anything that I put my mind to.  The whole experience was truly life changing on so many levels.

I know that my Dad would say that I was bonkers for doing it. I also know that running a marathon won’t bring him back, but I do know this much – he’d be proud that the last promise that I made to him, would have such a positive and profound impact on my life. 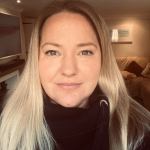